Unquenchable: America’s Water Crisis and What to do About It 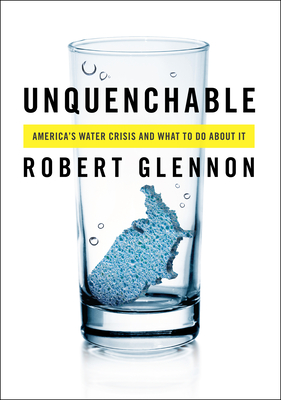 With the ever-increasing water crisis that concerns us today, it is imperative that we focus our attention to the shortages that exist and what solutions can be found. To increase public awareness about this crisis, Robert Glennon wrote the book, “Unquenchable, America’s Water Crises and What To Do About It.” His intention in writing this book is to explore the water crisis, stimulate our thinking and provide possible solutions.

What happens in Vegas stays in Vegas

The book begins with the analogy, “What happens in Vegas stays in Vegas,” the city’s advertising slogan teases as it invites visitors to lose their inhibitions and violate their moral principles. As a metropolitan area of 1.8 million people in the Mojave Desert, Las Vegas encourages irresponsible behavior about everything, including water. Much of what you will read in this article, comes from the book’s introduction and is either directly quoted or reworked. (“Unquenchable,” by Robert Glennon, Island Press, 2009)

During the 1980s and 1990s, glitz and glamour characterized development in Las Vegas. Extravagant homeowners built Bavarian chateaus with Italian marble and gilded fixtures. Excess was first a goal, then a standard. Ornate and lavish fountains, rococo entrances, manicured emerald lawns, lush landscapes, swimming pools, and spas dominated many subdivisions. Lake Las Vegas, a subdivision seventeen miles east of the Strip, boasts a 320-acre privately owned lake, three golf courses, and homes built for only the most upscale tastes. The fastest-growing city in the United States, Las Vegas welcomed growth with open arms. But, in 2001, the city of illusion and fantasy stumbled upon a stark reality: it was running out of water.

The Capital of Water Consumption?

During the 1920s, no one worried about Nevada needing water. With a population of roughly 5,000, Las Vegas was merely a whistle-stop on the Union Pacific Railroad. Its prospects for growth seemed minuscule until the construction of Hoover Dam provided a water supply – Lake Mead. In the 1940s and 1950s casinos started popping up featuring entertainment by celebrities attracting people from all over the country.

Today, water features at casinos on the Strip create the illusion that the city of Las Vegas has an abundance of water. In the late 1990s when the Bellagio hotel and casino was developed, an architect and an artist created a $40 million water feature with an eight-acre pond that holds 27 million gallons of water which sends water as high as 244 feet through more than 1,200 individually controlled water jets.

This was just the beginning. Las Vegas continued to grow, being the premier convention destination in the United States. In 2006, an astonishing 39 million tourists visited the city. Along with conventions, the city hosts fairs, expositions, rodeos, conferences, and trade shows, in addition to visitors coming to search for leisure-time activities which include shopping, dining, drinking, and gambling. But it’s not just the number of people who descend upon Vegas, it’s what they do while there: consume.

Turns Out…What Happens in Vegas Does Not Stay in Vegas

Las Vegas has grown as though water weren’t a problem, as if the city weren’t in a desert. Meanwhile, it has exhausted its rights to Colorado River water from Lake Mead. What were they to do? While many grandiose plans were implemented, the lack of water still remains a problem.

We Americans are spoiled. We rely on water to nourish our bodies and our souls, with the sight, sound, smell, and touch from exotic water features, pools and spas, to cascading waterfalls, babbling brooks, and quiet ponds. When we turn on the tap, out comes a limitless quantity of high-quality water for less money than we pay for our cell service or cable television. But as we are seeing, what’s happening in Vegas isn’t staying in Vegas. It’s becoming a national epidemic.

Ignorance Is Not Bliss

Ignorance is bliss when it comes to water. In almost every state in the country, a landowner can drill a domestic well anywhere, anytime with no questions asked. People use an abundance of water to clean off driveways and patios. We leave water running when shaving and brushing our teeth.

Water is a valuable, exhaustible resource, but as Las Vegas did until just a few years ago, we treat it as valueless and inexhaustible. Water plays a critical role in virtually every segment of our economy. A prosperous future depends on a secure and reliable water supply, but America is running out.  Sure, water still flows from our taps, but we’re draining our reserves like gamblers at casinos.

We Need a National Commitment

We tend to look at Las Vegas and think it’s a unique case, barely relevant to where the rest of us live. But the truth is, when it comes to water, Vegas offers us a glimpse of our own future. We, however, still control our destiny. With the turn of the century, more importance was given to water reallocation, where water for new uses would come from existing users who would have incentives to use less. One way to do this would be for our government to target wasteful practices by simply prohibiting current water users from using so much. Another way would be for the government to encourage a voluntary reallocation of water between current and new users.

All of this sounds good, but this will only happen by encouraging water conservation and by deciding which uses are most important. We have solutions within our grasp, we just need a national commitment to pursue them.

We Need a National Commitment

To learn more about the true dimensions of our water crisis and what can and should be done, you will want to read “Unquenchable.” At the River of Time, we want to become a major water conservation education center. Please won’t you join us and Make A Splash? This eye-opening and unforgettable book is now available for purchase at the River of Time’s gift shop, Riverbanks.